We all love a good series to follow and gush over, right? There are so many to choose from nowadays. These are five that I have selected for you as I hold them very closely to my heart. Even though you won’t see HP in this list, it is definitely one of my favourites too, but decided not to include it because it’s so well known and an obvious choice for a list. I wanted to select some series that are a few years old now or not as known as some others. But don’t worry, Shadowhunters, Mortal Instruments has been included, how could it not? 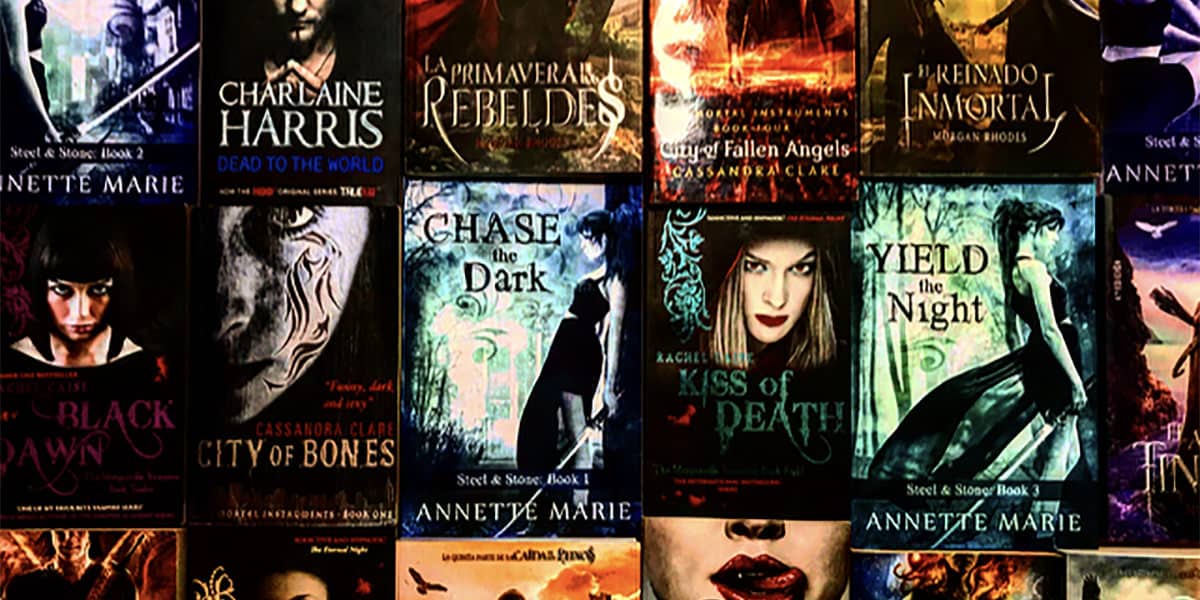 The order in which I’ve put the books in doesn’t mean that one is better than another. So the first in the list won’t necessary be favoured over the fifth series I’ve added. I hope you enjoy this selection and add a few to your Goodreads page if you haven’t read them yet. Let’s get into it!

5 Book Series You Will Love 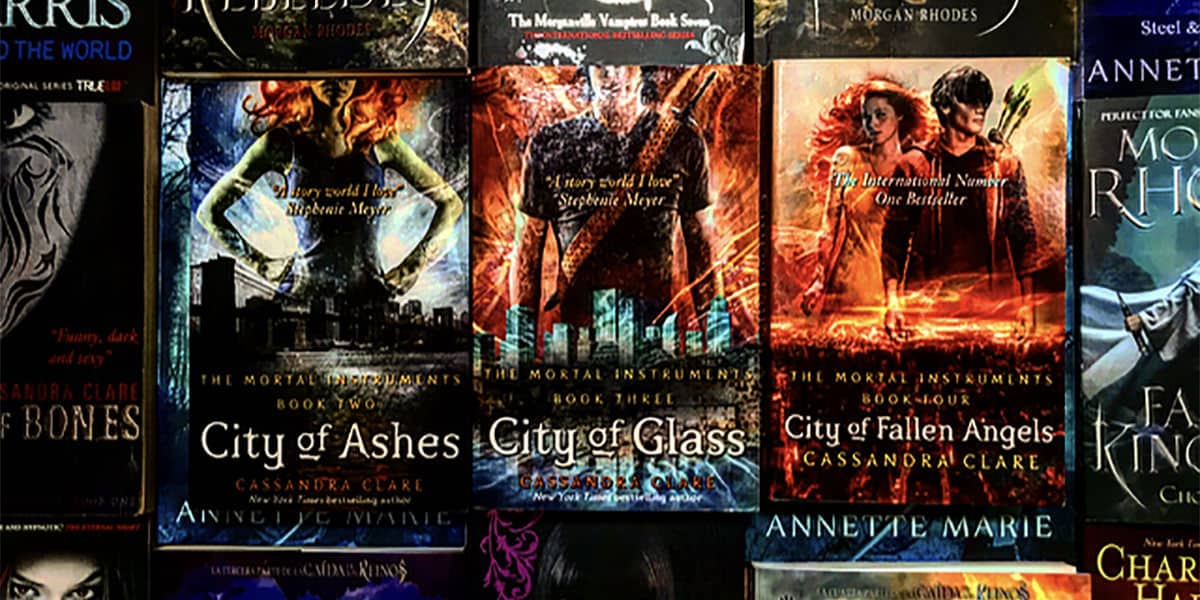 In my opinion, one of the best series ever written. Cassandra Clare is a storyteller, and oh boy, what a story she tells. A story about demons and those that must hunt them called Shadowhunters. We get to meet such an awesome array of characters, and Clare’s characters never fail to impress. It’s so easy to imagine them as real people that it’s disappointing and heartbreaking when you realize they are not.

The story is about a young girl named Clary that has no idea demons exist. Until she sees a boy kill one in a club. Her world is suddenly turned upside down and nothing will ever be the same. This series is perfect for anyone looking for some urban fantasy, demons and hunters!

Here’s the blurb to the very first book!

When fifteen-year-old Clary Fray heads out to the Pandemonium Club in New York City, she hardly expects to witness a murder― much less a murder committed by three teenagers covered with strange tattoos and brandishing bizarre weapons. Then the body disappears into thin air. It’s hard to call the police when the murderers are invisible to everyone else and when there is nothing―not even a smear of blood―to show that a boy has died. Or was he a boy?

This is Clary’s first meeting with the Shadowhunters, warriors dedicated to ridding the earth of demons. It’s also her first encounter with Jace, a Shadowhunter who looks a little like an angel and acts a lot like a jerk. Within twenty-four hours Clary is pulled into Jace’s world with a vengeance when her mother disappears and Clary herself is attacked by a demon. But why would demons be interested in ordinary mundanes like Clary and her mother? And how did Clary suddenly get the Sight? The Shadowhunters would like to know… 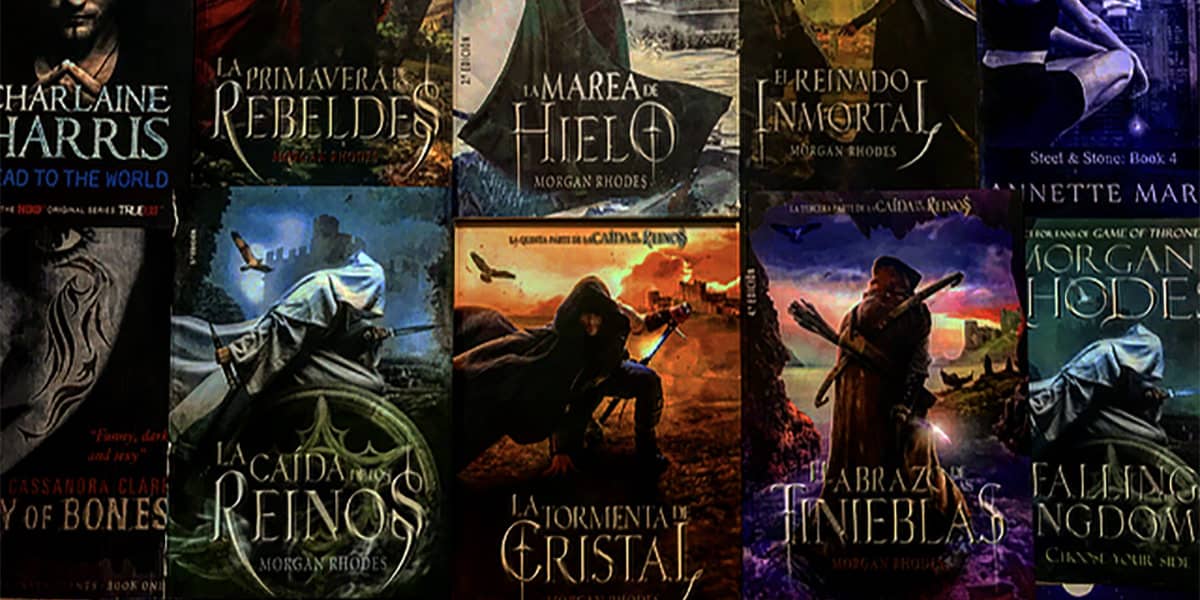 I’d never read anything by this author before, but I am so glad I picked this series up as it has a bit of everything; magic, romance, betrayals. It’s basically a Game of Thrones for YA. Those that love fantasy will not be able to put these books down. This series if full of twists and turns, and you seriously will never get bored throughout. You get to follow so many different characters and everything they’re fighting for; whether it’s a throne, love or revenge. This is a great series if you want some fantasy in your life!

So, if that hasn’t convinced you enough; here’s the blurb!

In the three kingdoms of Mytica, magic has long been forgotten. And while hard-won peace has reigned for centuries, a deadly unrest now simmers below the surface.

As the rulers of each kingdom grapple for power, the lives of their subjects are brutally transformed… and four key players, royals and rebels alike, find their fates forever intertwined. Cleo, Jonas, Lucia, and Magnus are caught in a dizzying world of treacherous betrayals, shocking murders, secret alliances, and even unforeseen love.

The only outcome that’s certain is that kingdoms will fall. Who will emerge triumphant when all they know has collapsed?

It’s the eve of war…. Choose your side.

Princess: Raised in pampered luxury, Cleo must now embark on a rough and treacherous journey into enemy territory in search of magic long thought extinct.

Rebel: Jonas, enraged at injustice, lashes out against the forces of oppression that have kept his country cruelly impoverished. To his shock, he finds himself the leader of a people’s revolution centuries in the making.

Sorceress: Lucia, adopted at birth into the royal family, discovers the truth about her past—and the supernatural legacy she is destined to wield.

Heir: Bred for aggression and trained to conquer, firstborn son Magnus begins to realize that the heart can be more lethal than the sword…. 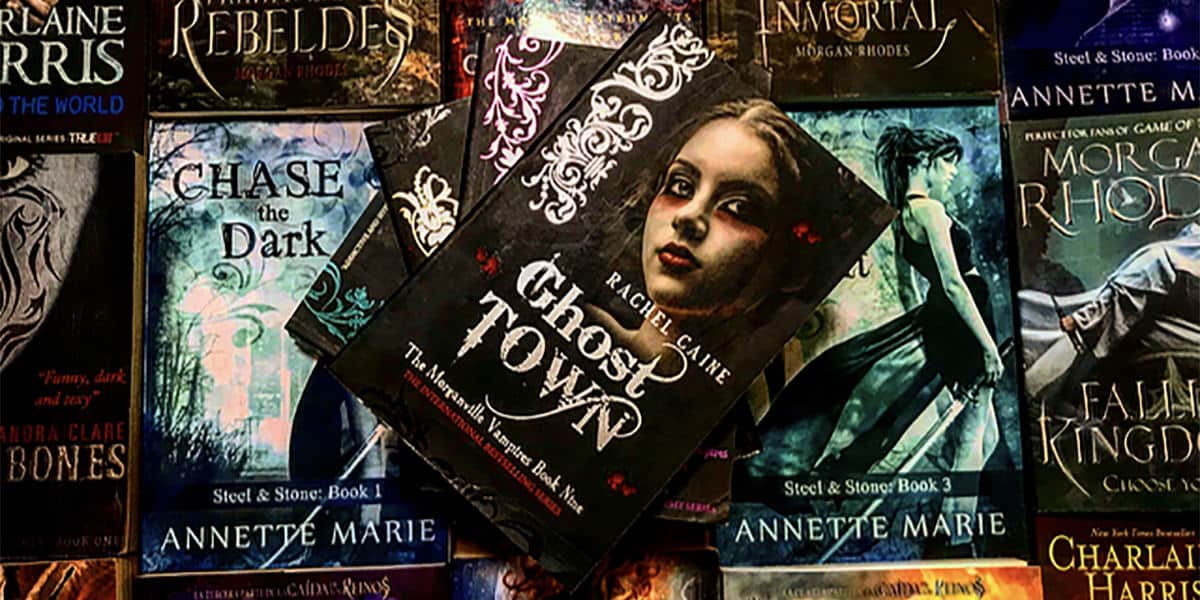 I first picked these books up when I was 15 years old. At the time, vampires were heavily in fashion after a certain book made them this way. I’ve always been a huge vampire fan and this series is still one of my all time favourites. It is packed with action, crazy characters and a great romance.

Each book has a different adventure you get to follow through with the four main characters that live in this crazy town. You never get bored (even though there is 16 books to this series) You will eat these books for breakfast one after the other they’re so good!

We follow Claire Danvers, a young girl who is studying at university. After being bullied in her dorms, she decides to find some other place to live. Her new roommates hide secrets as well as the town. Claire soon finds out and all hell breaks loose. Even though all books follow a main plotline, each book will have a new plot spring up, making each book unique and so much fun!

Here’s the blurb to the very first book in the series!

College freshman Claire Danvers has had enough of her nightmarish dorm situation. When Claire heads off-campus, the imposing old house where she finds a room may not be much better. Her new roommates don’t show many signs of life, but they’ll have Claire’s back when the town’s deepest secrets come crawling out, hungry for fresh blood. Will she be able to face the town’s terror or will she drown like everyone else? 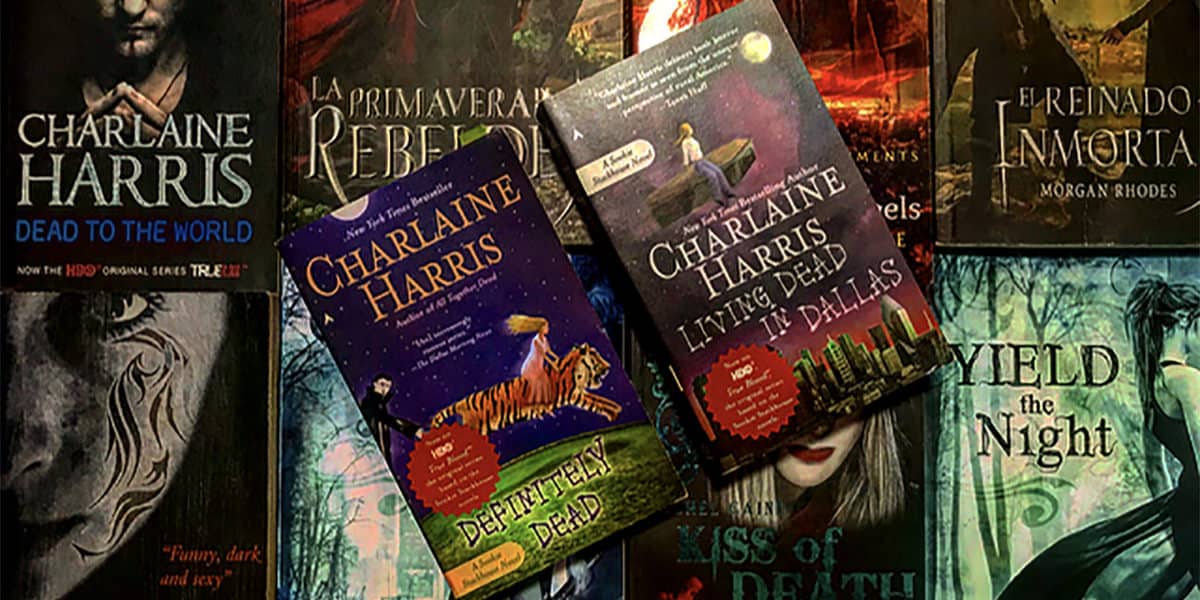 One of the very best vampire series I have ever had the pleasure to read. We follow the life of waitress Sookie Stackhouse. She’s a normal girl, working in a small town. Until a vampire walks into the bar and her entire life changes. If you’re into vampires, romance and mystery, this is a series you definitely shouldn’t miss out on.

By now you’ve probably heard of this series because it actually became a TV show called Trueblood. And even though I think the TV show did a great job, nothing compares to Charlaine Harris’s awesome writing style. This series is a true roller-coaster of emotions and adventures!

Sookie Stackhouse is just a small-time cocktail waitress in small-town Louisiana. Until the vampire of her dreams walks into her life-and one of her coworkers checks out….

Maybe having a vampire for a boyfriend isn’t such a bright idea. 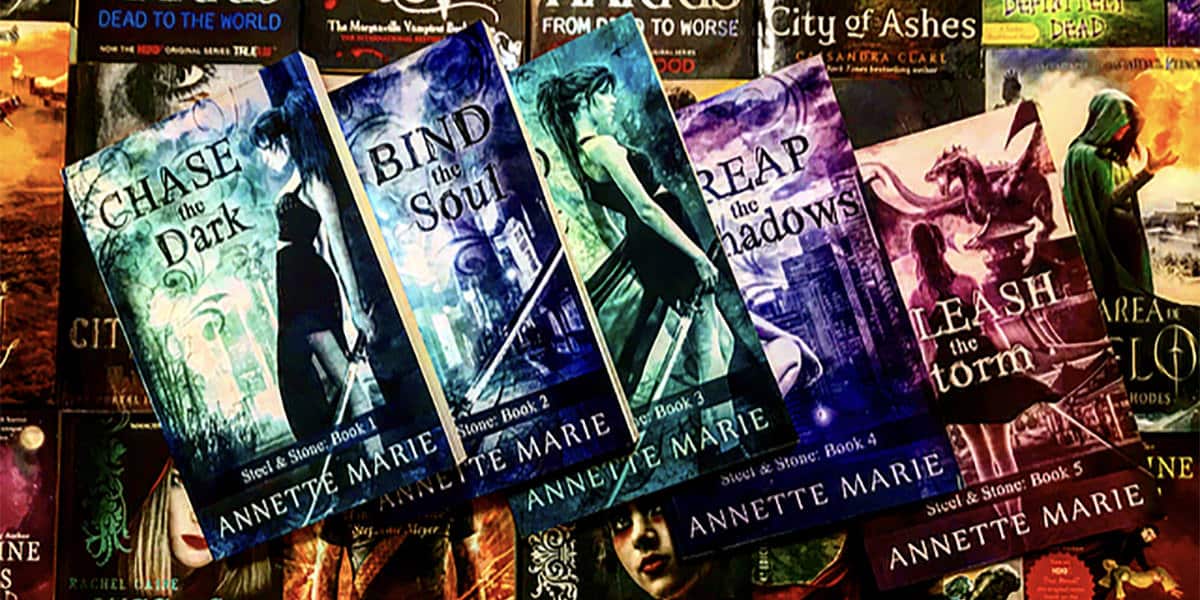 Urban fantasy done right. This is definitely one not to miss. Piper is training to become a Consul, which is basically like an ambassador between humans and daemons. But it all goes wrong when someone breaks in and steals the Sahar Stone, a magical weapon. I loved everything about this series. The characters were fascinating, witty and so real I could close my eyes and imagine them to perfection.

I started with Steel and Stone series by this author and fell so in love with the world she had created that I ended up getting all her books, and I haven’t been disappointed! Every single world she creates is wonderful.

If you’re an urban fantasy reader, this is one series you definitely should NOT miss out on!

This is the blurb for the very first book!

Piper Griffiths wants one thing in life: To become a Consul, a keeper of the peace between humans and daemons. There are three obstacles in her way.

The first is Lyre. Incubus. Hotter than hell and with a wicked streak to match. His greatest mission in life is to get Piper into bed and otherwise annoy the crap out of her. The second is Ash. Draconian. Powerful. Dangerous. He knows too much and reveals nothing. Also, disturbingly attractive — and scary. Did she mention scary?

The third is the Sahar Stone. Top secret magical weapon of mass destruction. Previously hidden in her Consulate until thieves broke in, went on a murder spree, and disappeared with the weapon.

And they left Piper to take the fall for their crimes.

Now she’s on the run, her dreams of becoming a Consul shattered and every daemon in the city gunning to kill her. She’s dead on her own, but there’s no one she can trust — no one except two entirely untrustworthy daemons … See problems one and two.

I hope you enjoyed this post! Have you read any of the books mentioned above? If so, which ones? Did you enjoy them as much as me? Let me know in a comment below. And, mention a series you absolutely love in your comment!