I bought the first book, Spellslinger, when it was first published back in 2017. It stayed on my shelf, forgotten and unwanted. One day I decided to pick it up because I’d seen that the entire series had been completely and was quite curious. I am SO glad I did. The first book was brilliant. The second one was MAGNIFICENT.

Four months after fleeing his own people, Kellen has discovered he’s an even worse outlaw than he was mage. It doesn’t help that his only allies are a swaggering card player and a thieving squirrel cat. Then he meets Seneira, a blindfolded girl who isn’t blind, and whose secrets get them caught up in a conspiracy of magic, blackmail and murder. Now Kellen must find the mage responsible before the entire frontier falls victim to the mystical plague known as the shadowblack. 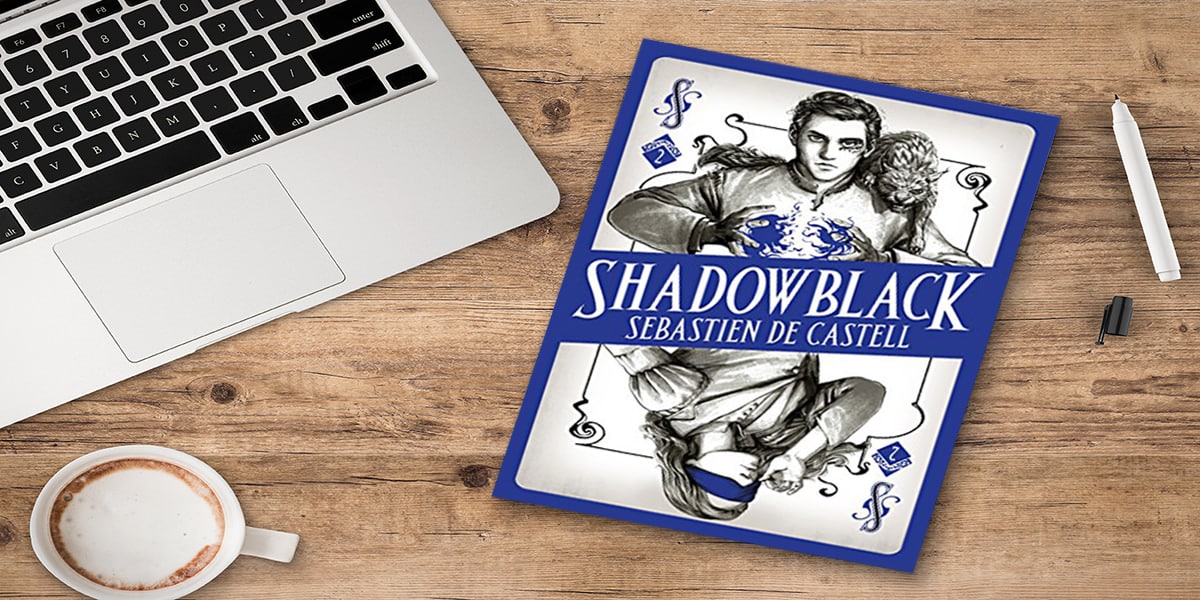 What’s this book about?

The second book in the page-turning Spellslinger series for all teen, YA, adult and fantasy readers. It’s a few months since Kellen left his people behind. Now aged sixteen, Kellen is an outlaw, relying on his wits to keep him alive in the land of the Seven Sands. He misses home, he misses family and more than anything, he misses Nephenia, the girl he left behind.

Then he meets Seneira, a blindfolded girl who isn’t blind, and who carries a secret that’s all too familiar to Kellen. Kellen and Ferius resolve to help – but the stakes are far higher than they realise. A Shadowblack plague is taking hold – and Kellen can’t help but suspect his own people may even be behind it. Perfect for fans of The Dark Tower, Firefly, The Hunger Games and Guardians of the Galaxy.

My review of Shadowblack Book

I loved the first book. I loved this one even more. Kellen has become easily one of my fav characters of all time. Why might you ask? Well, mainly because he is the opposite to almost every single character we see nowadays. He isn’t the hero, he isn’t the best at what he does and basically, well, he isn’t very good at anything at all. And I love him for that very reason alone. You expect him to suddenly become great at something, and yet, he fails time and time again. But he never truly gives up. Yes, he does whine, but then again, he is only 15 years old. I do exactly the same and I’m 27.

The plot in this second book was amazing. Even though the first book had an amazing plot, I really did find this one so much more fun and entertaining. Why? Because in the first book it’s mainly Kellen fighting with everyone from his clan, trying to become something that he isn’t, whereas in this story, it’s more about him helping others. I don’t know, I just found it so much more exciting. It was a page-turner.

The romance in these books (if we can call it that because there isn’t really much romance) to me is unnecessary. I do hope the author doesn’t give Kellen a romantic interest in each single book because I think that would irritate me a little. Even though it isn’t a main topic in the books, and I get that Kellen is 15 and he’s going to find romance along his journeys, I would like a few books to have a bit of a breathe from romantic interests. It’s not important to the story, it doesn’t really add anything in my opinion. I must prefer the friendships that are being built between the different characters and the crazy situations they get themselves into. I feel like many author and publishers feel that they need to include romance or if not the readers won’t be interested. But I believe it’s probably the opposite. For books like these, romance isn’t necessary. At least not always.

I cannot wait to get my hands on the 3rd book of this series and see what happens next.

What about you? Have you read these books, and if so, what’s your opinion? Let me know!